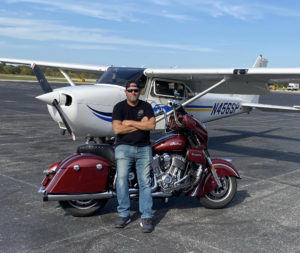 Ever since Dale was a young child, he had a passion for flying. He used to have planes hanging from his ceiling, and his mother would take him to the airport and let him sit in the tower and watch planes take off and land. It wasn’t until he turned 40 that he made the decision to start pursuing his dream. On October 2, 2017, Dale took his first flying lesson. By mid November he partnered with a friend and bought Whiskey Girl. In July of 2018, his dream of becoming a pilot came true when he passed his private pilot check ride. Dale has his High Performance and Complex endorsement and is currently working on his Instrument and Multi-Engine ratings. His ultimate goal has now changed and he wishes to get his commercial and flight instructors license so that he may help others achieve their dreams.

Kentucky Flight Training Center is a flight training company that prides ourselves on providing quality training at an affordable price. 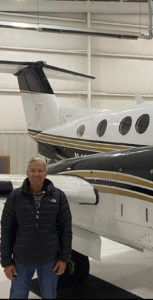 Don has been flying since high school and brings over 30 years of experience as a flight instructor. In addition to flight instruction, Don is a full time corporate pilot. He is both a Certified Flight Instructor and a Multi Engine Instructor. He holds type-ratings on King Air 300 and L39. 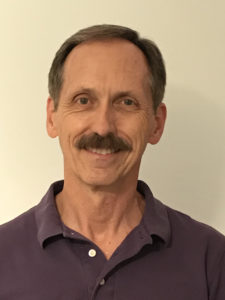 A Louisville native and long-time pilot, Jim soloed in 1972 at the old Kentucky Flying Service at Bowman Field. A CFI since 1975, he has trained numerous pilots ranging from first-flight intro lessons to airline jet checkouts on the B-747. In March 2018, Jim retired from UPS as a Captain on the MD11 after more than 30 years of service, flying both domestic and international routes. He holds an ATP with type-ratings on the B747, MD11, & B727, and a Commercial license for Airplane Single-engine Land and Sea. Jim’s passion for aviation and strong attention to detail provide thorough training for his students with an emphasis on safety. 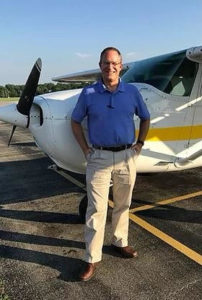 You may remember a variety of occupations or fun pastimes that caught your attention at one time or another as something you wanted to do or at least explore. For Tim, that something has always been flying. Tim began training to be a pilot at the age of sixteen, about the same time as he was learning to drive a car. And ever since that first flight, breaking the bounds of gravity and soaring into the air above is just as exhilarating as that very first time. Tim has been teaching as a flight instructor for over 30 years at Bowman Field, possess a B.S. degree in Aviation Technology and a Masters degree in Aeronautical Science. He is a CFII and possess both an Airframe and Powerplant License and is licensed as an Airline Transport Pilot (ATP). After recently retiring from UPS as an aircraft maintenance supervisor, Tim trained as a First Officer with a regional carrier for a major airline. He has been blessed to have had countless memorable experiences in something he thoroughly enjoys. Regardless of what you might be looking for in an aviation related field, Tim welcomes the opportunity to help you get there through ground school, flight simulation and/or flight training in the aircraft. Let’s move that dream of yours to a rewarding reality. 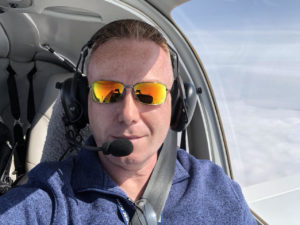 Chris is a Louisville native who flew his first solo as a Senior in the Academy of Shawnee’s new aviation program in 1990. A graduate of Purdue University’s Aero Engineering program, Chris subsequently joined the Navy as a Naval Flight Officer. One of his most memorable duties was assisting new fleet aviators to earn their aircraft carrier qualification in the EA-6B Prowler. After his naval career, Chris settled back in Louisville and began flight training in 2019. As a Certified Flight Instructor and Instrument Instructor, he enjoys helping pilots earn their wings and become safe citizens in the aviation community. 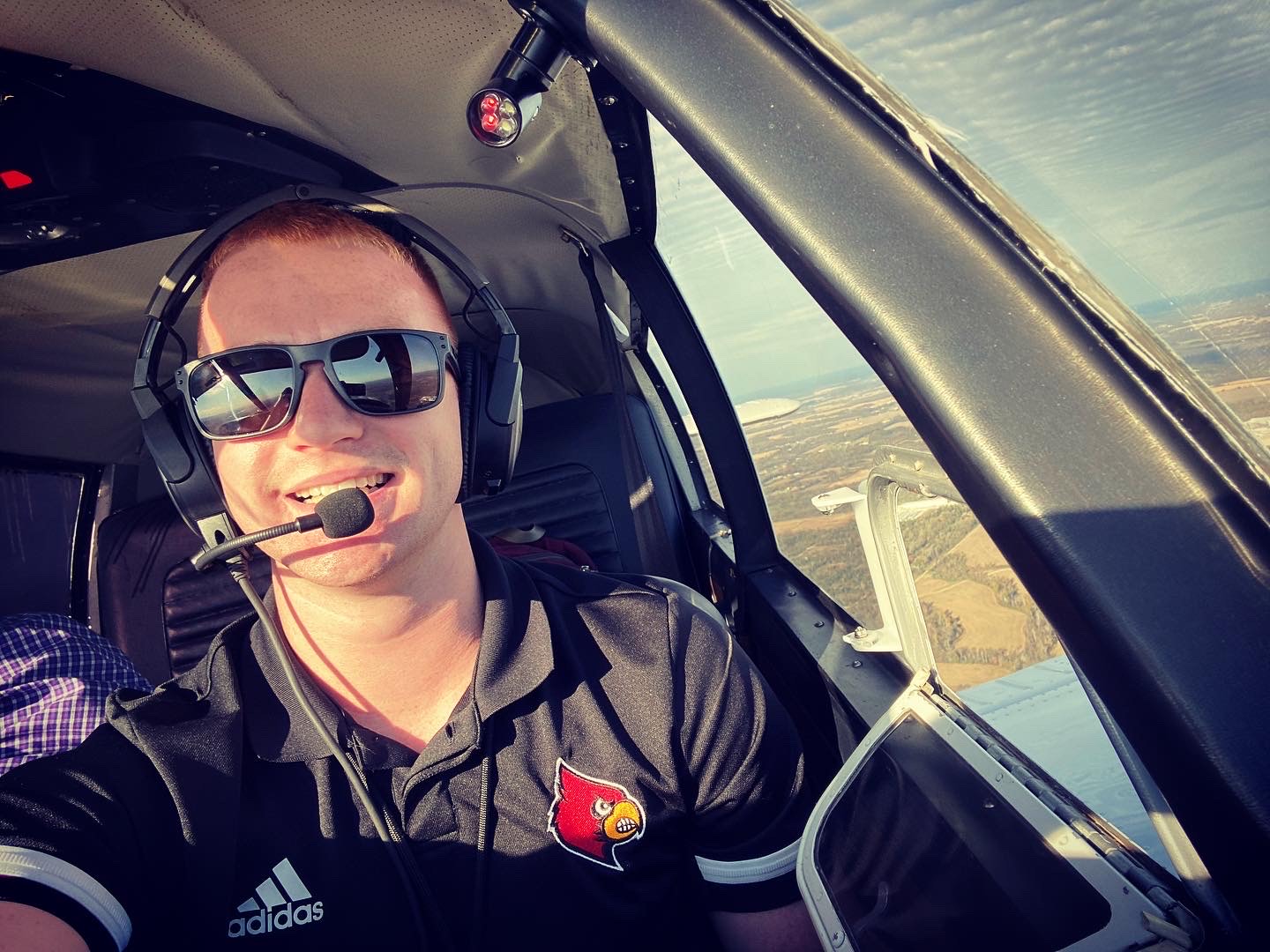 Gabriel is a Louisville native and first generation pilot who began flying in 2017. Since his first flight, he fell in love with everything aviation related and has continued to receive certificates and grow as a pilot. After graduating from the University of Louisville with a degree in Finance, Gabriel knew his true calling was to be a pilot and continued his flight training. Now a CFII, Gabriel looks forward to sharing and expanding his passion for aviation through teaching the next generation of pilots. 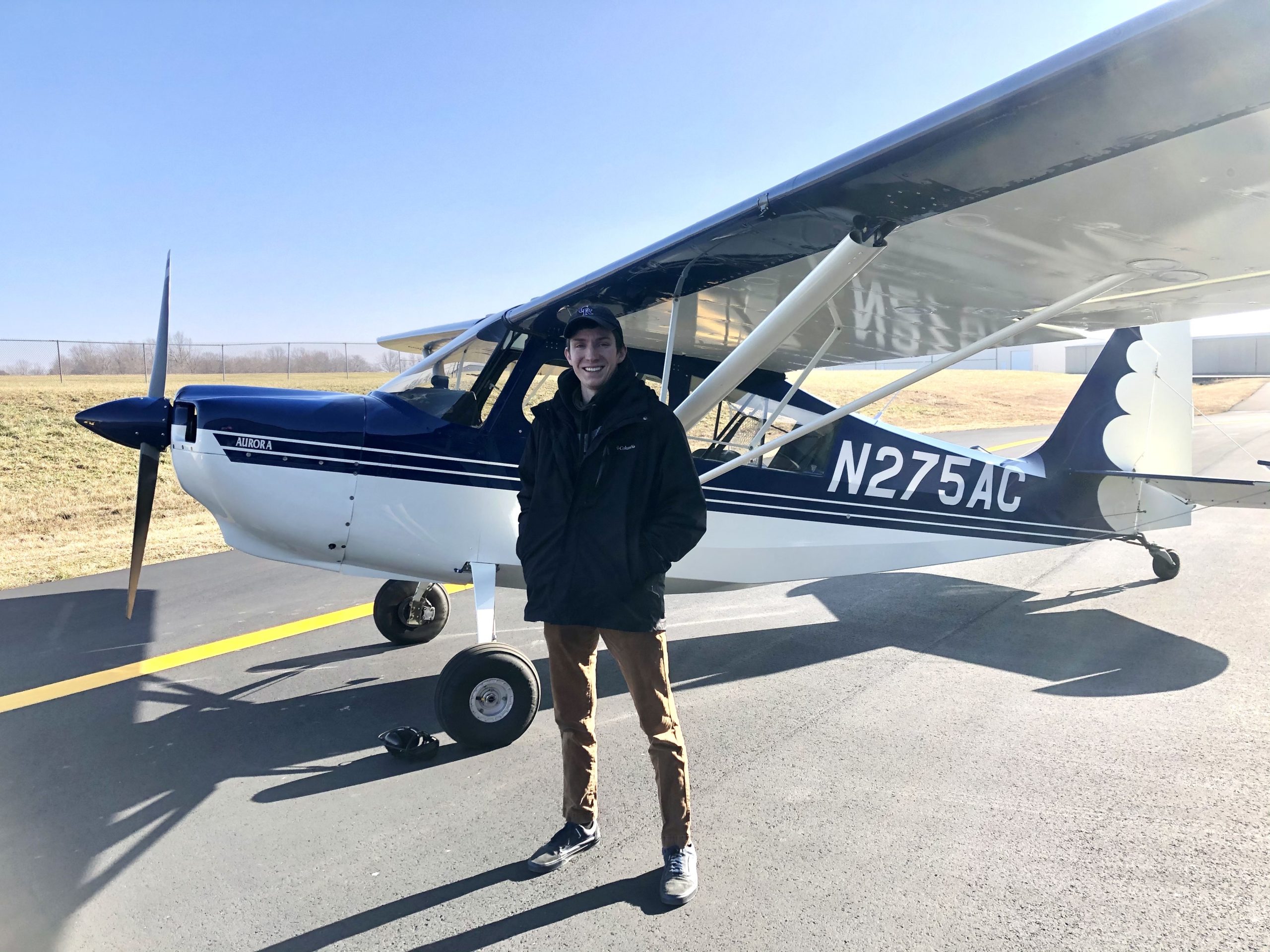 Noah’s passion for aviation began later in life than most. He began his training in the summer of 2017 while going to school and working at the local FBO. He received his private, instrument and multi engine commercial ratings in Wichita Kansas and then finished up with his CFI in Louisville with KFTC. In his free time, Noah enjoys being with family and doing most outdoor activities. He aims to share what he has learned with his students while emphasizing safety and continued education throughout their entire aviation careers. 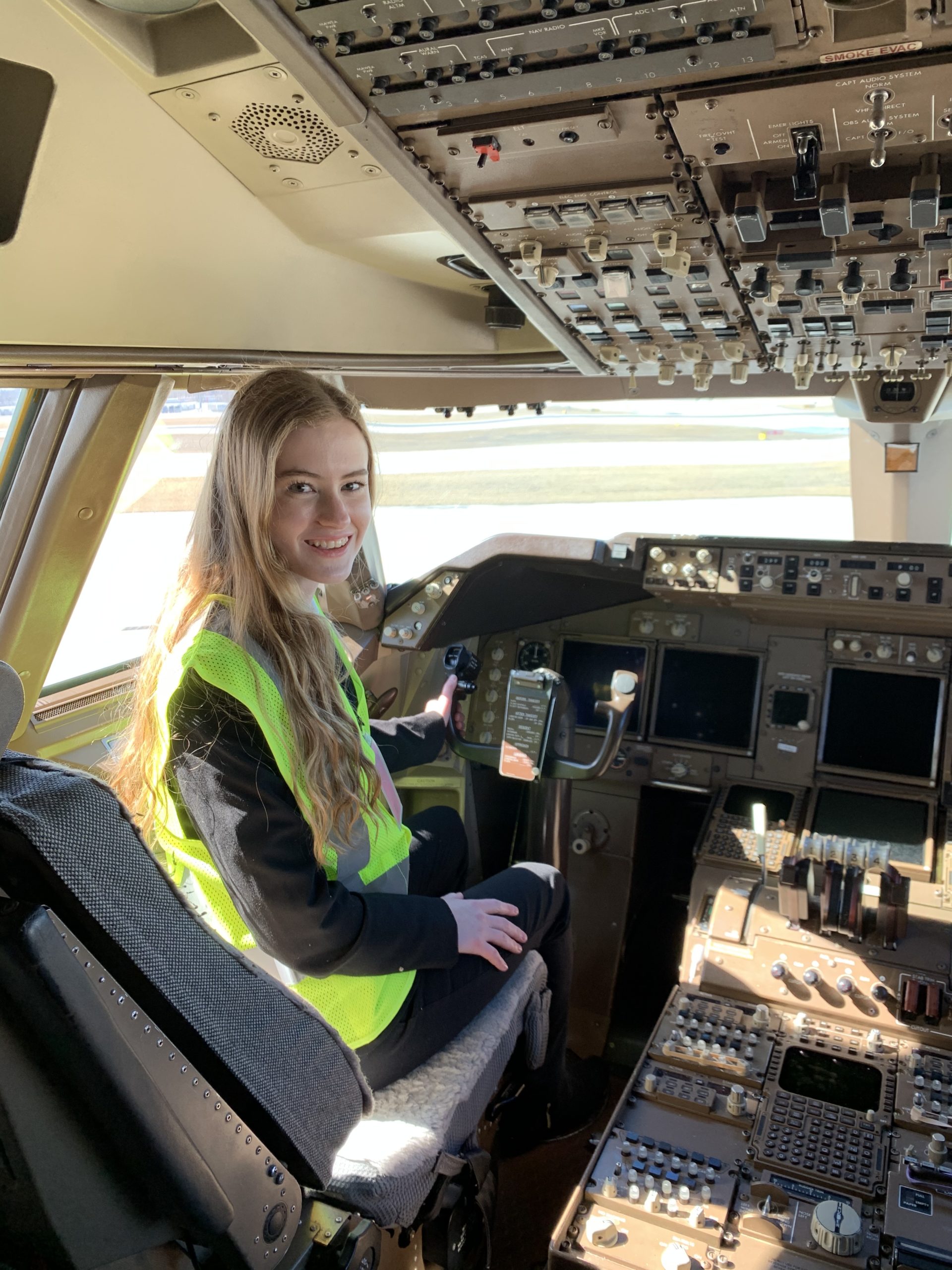 Lauren grew up in an airport community in Houston, Texas with a grass runway in her backyard. She decided to become a pilot at 4 years old when her father let her sit in the front seat of his V-Tail Bonanza for the first time. She soloed when she was 16 and completed her private pilot license before going to college at Baylor University. While at Baylor, Lauren majored in Aviation Sciences and flight instructed for a local flight school in Waco, Texas. After graduating from Baylor in two and a half years, Lauren has come to Louisville to be a UPS FlightPath Intern. 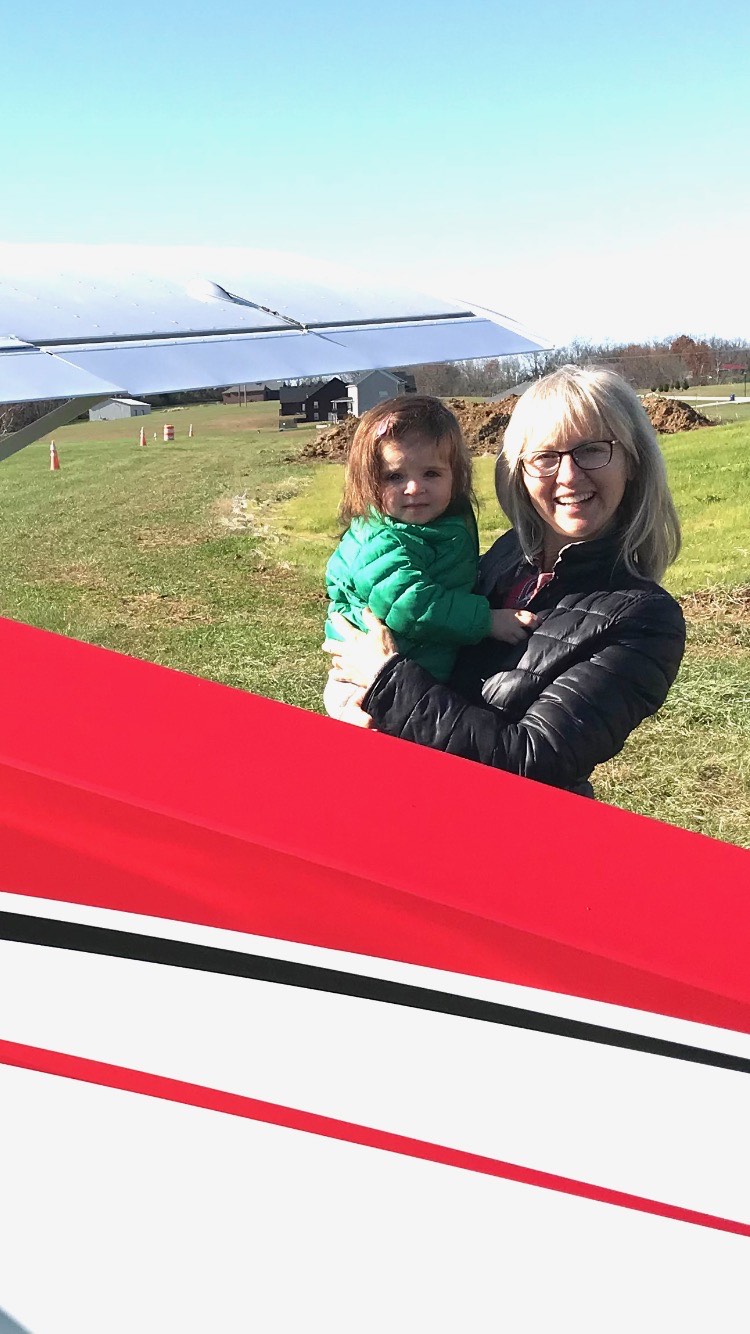 Natalie learned to fly at the age of 17. She worked as an Air Traffic Controller for over 24 years. Most of her career was spent in the radar room and tower at Louisville International Airport (KSDF). After retirement Natalie earned the ratings required to become a CFII. Natalie is thankful for the privilege to fly and the opportunity to share it with others… including her granddaughter. 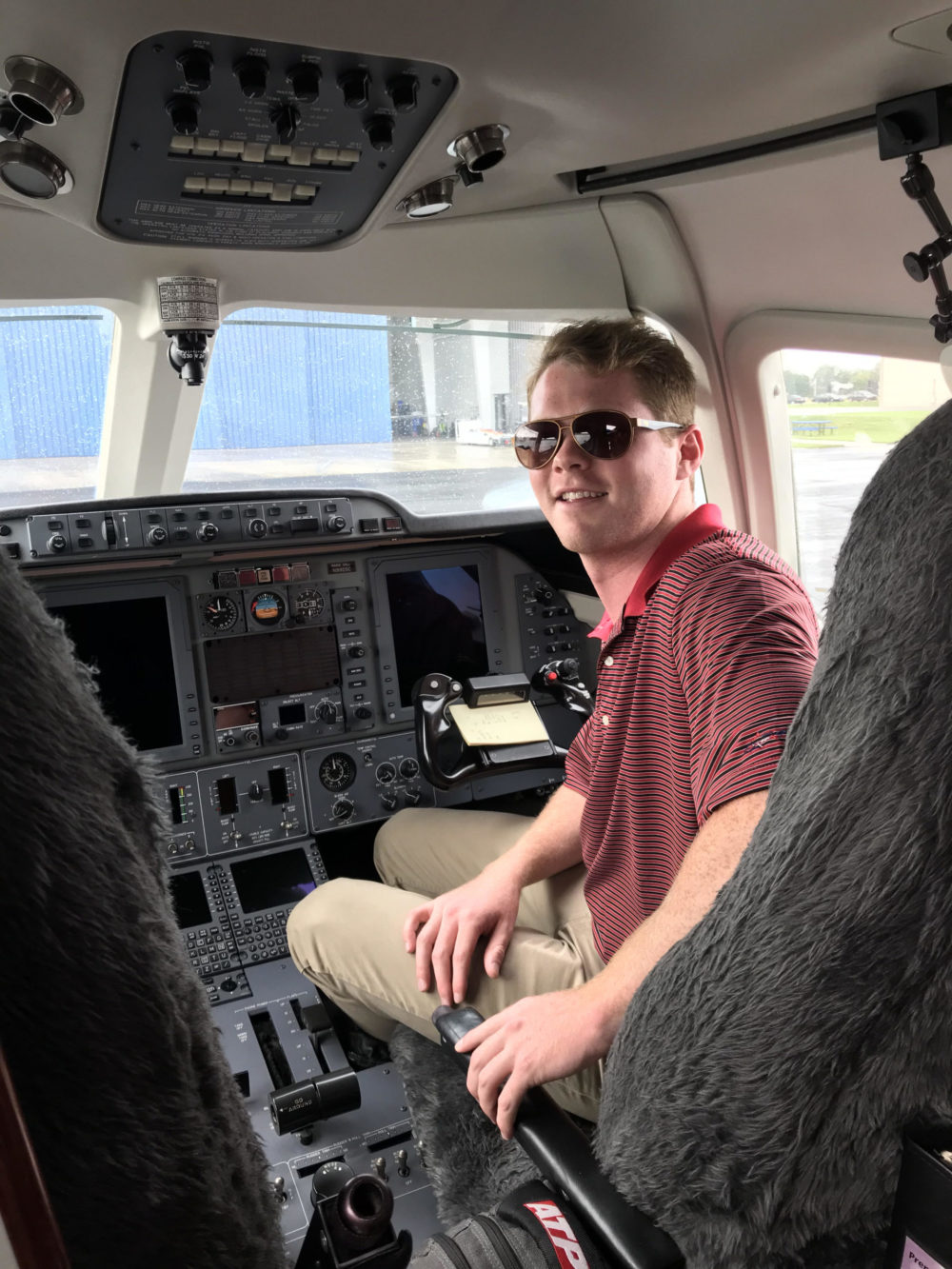 Levy is from North Carolina where he grew up flying on grass strips in the mountains with his grandfather. Although he received some flight training from his grandfather while in high school, Levy didn’t pursue aviation as a career until after he graduated college. Upon graduating, he received his ratings through ATP at Clark Regional and joined the KFTC team in hopes to help others fulfill their own aviation dreams and to create a safer aviation community. 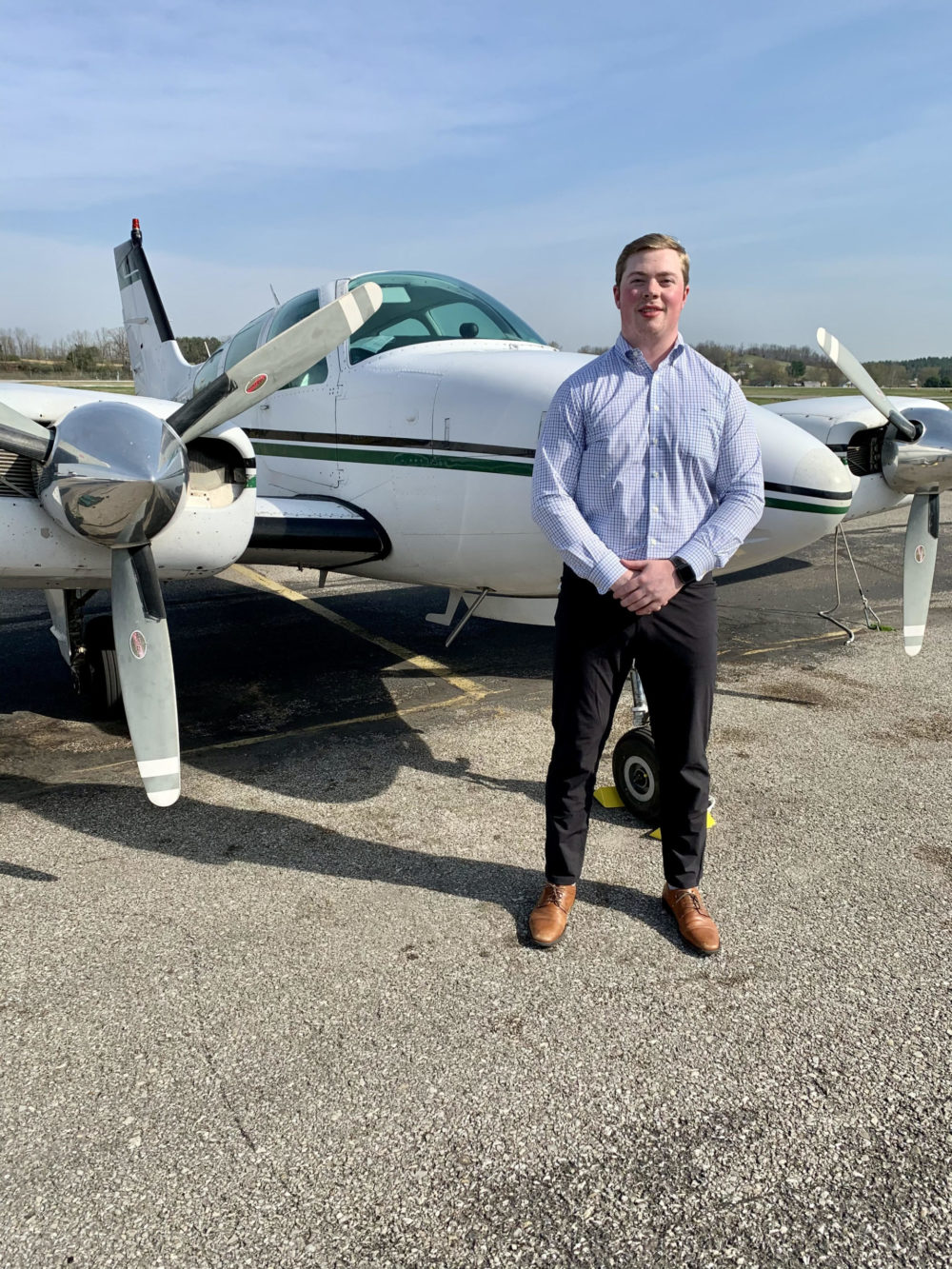 Patrick started flying gliders at the age of 14 in his hometown just outside of Philadelphia. After graduating from Ohio University where he majored in Aviation Flight, Patrick moved to Louisville to be a full-time flight instructor. As a CFII, Patrick strives to create an enjoyable flight training atmosphere with safety as his main priority. 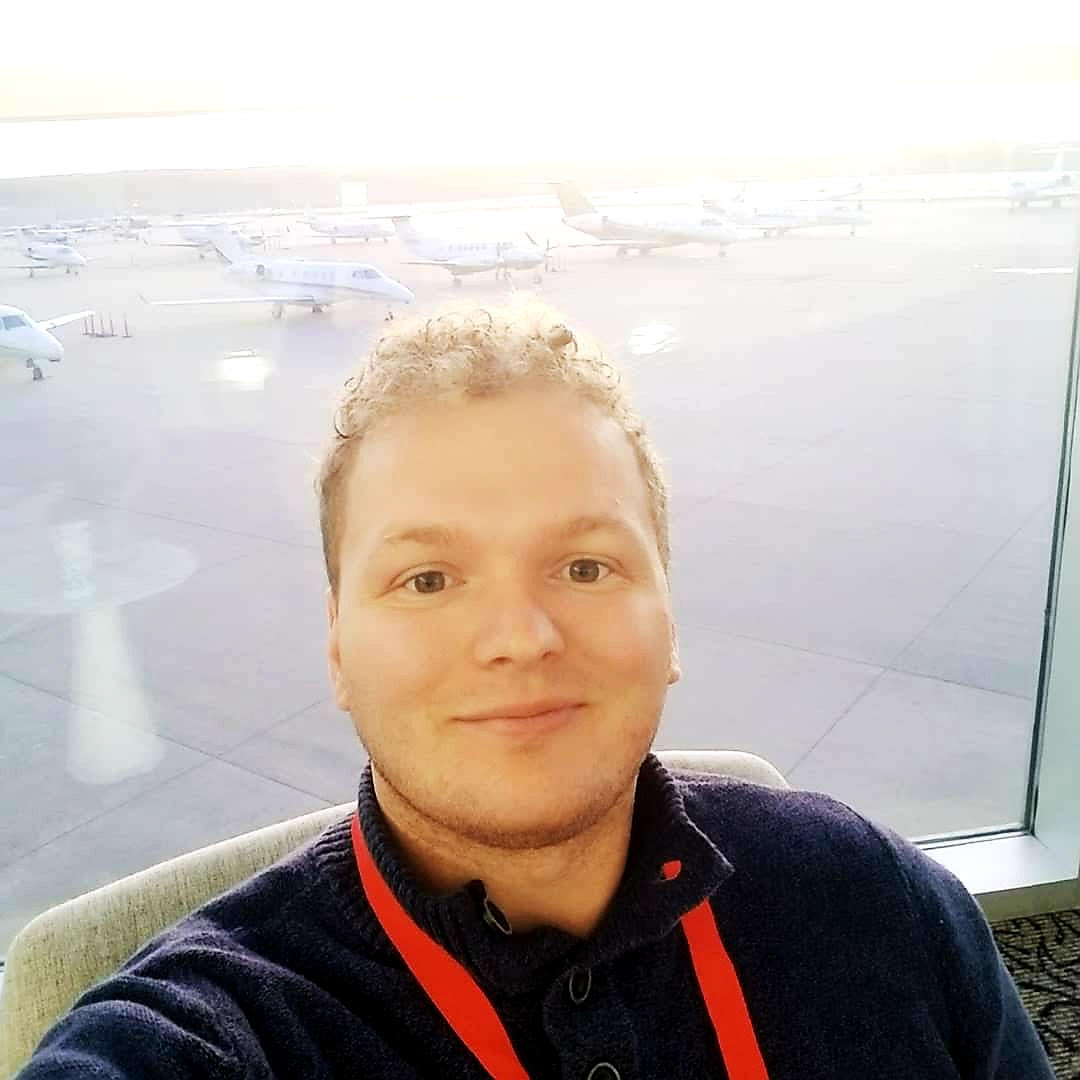 After earning his degree at UofL and joining the Peace Corps, William finally set his sights on aviation and hasn’t looked back. He earned his CFI-I and MEI at ATP flight school and moved to North Carolina to start instructing before returning to Louisville and joining KFTC. Over the past 2 years he has found a love of instructing and is happy to work patiently with new or experienced students. 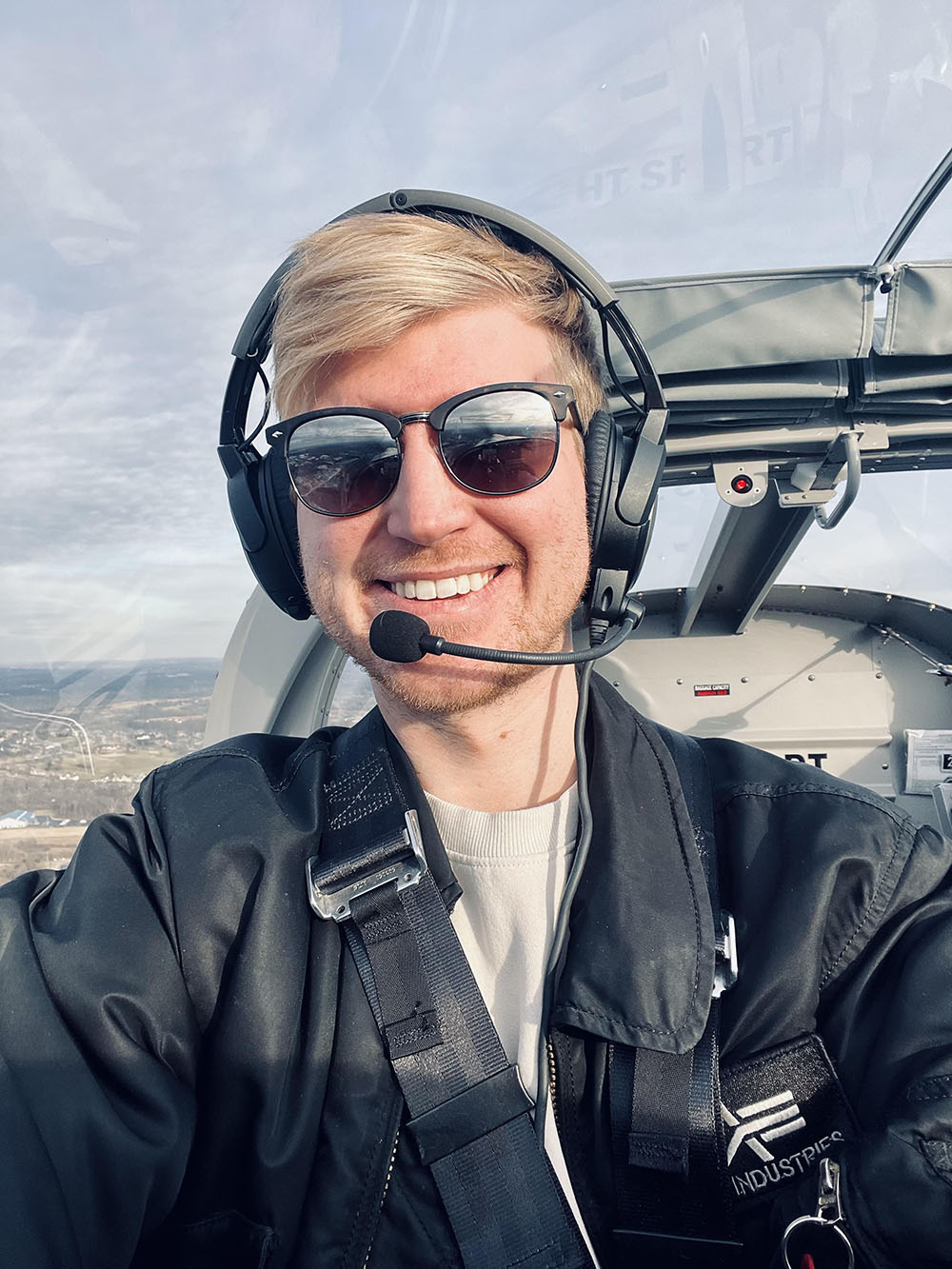 Isaac is from Western Kentucky, and grew up playing flight simulators. At age 13, he took his first flight and never looked back. In highschool, he realized he had a passion for aviation and decided to pursue the career of becoming a pilot. He continued to build time while attending college at the University of Louisville, receiving his instrument, commercial, and multi engine ratings. With aviation being such an important part of his life, he takes pride in helping others achieve their own personal goals and showing them what a positive impact aviation can have in their life. He looks forward to one day becoming an international airline pilot. 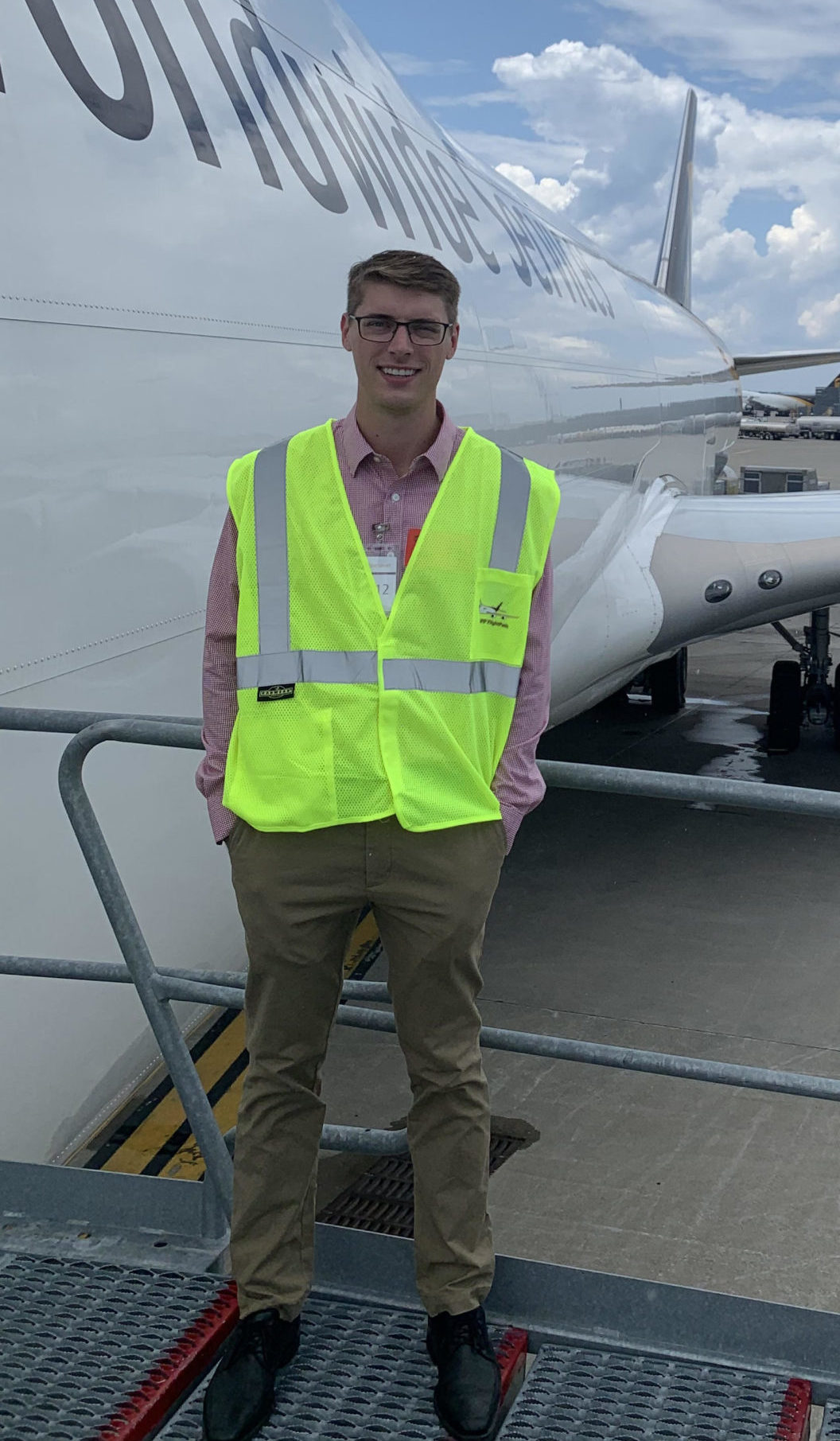 Alex moved to Louisville this past summer from Minnesota. He graduated from Utah Valley University with a BA degree in Professional Flight in 2021. Currently, Alex works full-time as a UPS Flightpath Intern, but he has been flying since 2017. Prior to accepting this position, Alex was instructing out of Fleming Field in South Saint Paul, MN as a CFI/CFII. Before that, he was a banner-tow pilot out of North Perry’s Airport in Pembrooke Pines, FL. 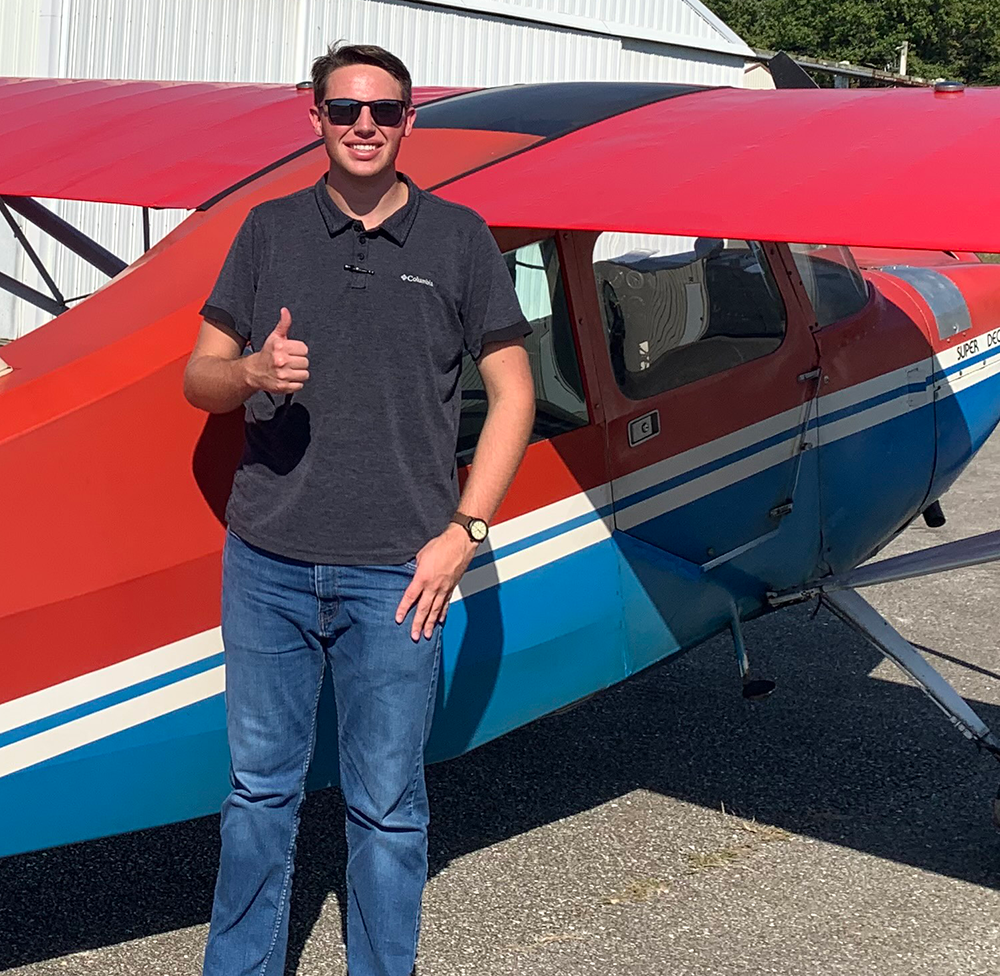 Grayson was born into a family of pilots who inspired him into a career in aviation. He began his flight training at Middle Georgia State University, where he continues to pursue a degree in aviation science online. Upon moving to Louisville, he joined the Kentucky Flight Training Center family and completed the remainder of his flight ratings. Now, Grayson is a motivated flight instructor with the goal of helping others achieve their aeronautical aspirations. 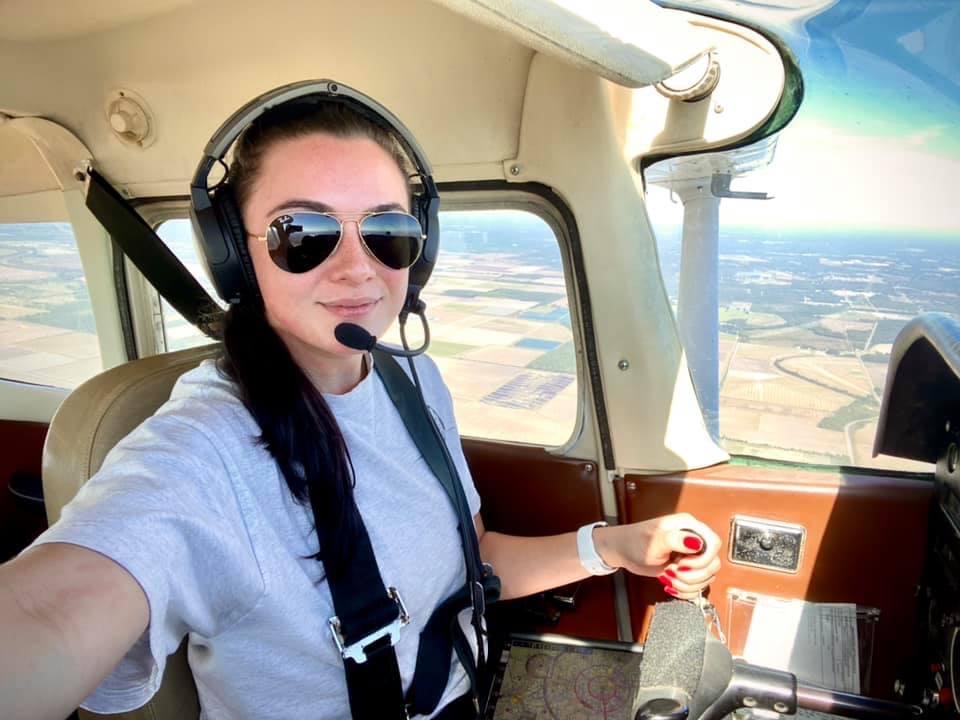 Elizabeth was born and raised in Louisville. After high school she joined the KY Air National Guard and has spent the last 10 years working in operations. During that time she graduated from Bellarmine University in 2017 with a BA in Environmental Studies before she realized aviation was where she truly wanted to be. After her introductory flight, she has since received her PPL, Instrument, Commercial and her CFI! As a CFI, Elizabeth looks forward to helping others find the beauty in flying while pursuing their own goals and aspirations! 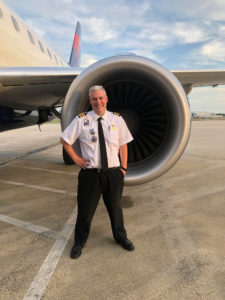 Jacob Goering has been a CFII and instructing around Madison, IN since 2006. He is a Purdue Aviation graduate and holds FAA aircraft mechanic Airframe and Power Plant (A&P) certificates and the FAA Airline Transport Pilot (ATP) certificate. Jacob is a Captain and instructor for a passenger airline based in Chicago and holds type ratings in Convair, Embraer and Bombardier aircraft. 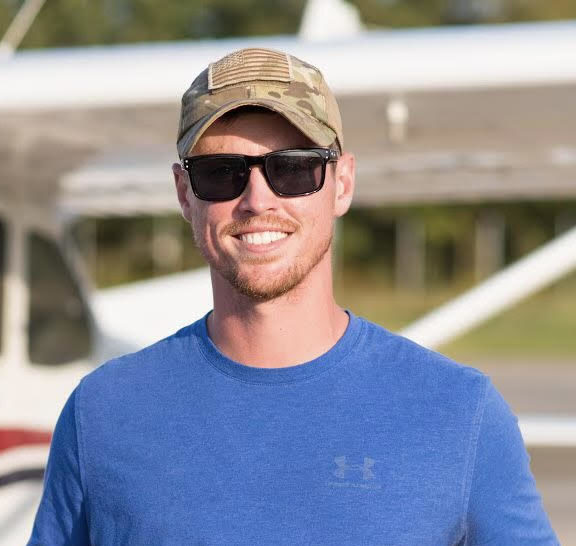 Dalton started his aviation journey in 2011 through a high school program in southern Indiana. After receiving his PPL in 2021, he joined the Air Force as a mechanic. After spending 6 years traveling the world, he started right back up with training after separation in 2019. He is currently a CFI in Madison, Indiana and still a member of the Air National Guard and lives with his beautiful wife and dog.

Dalton’s goal is to join the airlines after gaining hours, while helping students achieve their lifelong dreams along the way. 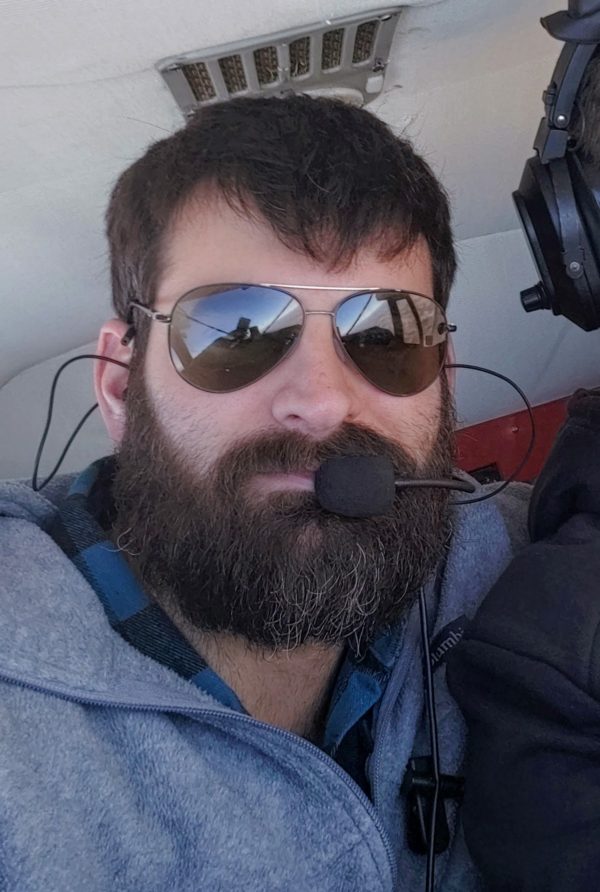 Thomas grew up around Austin, Texas, and dreamed of a flying career ever since a Young Eagles flight introduced him to aviation at 11 years old. He completed his CFI, CFII, and MEI with ATP in Austin, while finishing up his degree in Physical Therapy at Texas State University. In his free time, he loves to tinker with old cars or motorcycles and competes in endurance auto racing as often as he can. Currently, he enjoys safely guiding new students into the wonderful world of aviation.